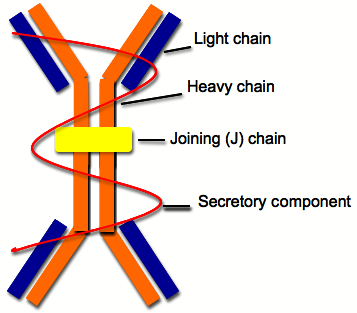 If antibodies were superheroes, then human milk secretory immunoglobulin A (sIgA) would be “The Avengers”, taking on the pathogens no single superhero could stand. Milk sIgA is able to protect infants against a multitude of respiratory and gastrointestinal pathogens, including E. coli, salmonella, and pneumonia. But perhaps its greatest known power comes from its unique molecular structure—two IgA molecules held together by a joining chain (J) and a secretory component (s)—allowing sIgA to resist degradation by gastrointestinal enzymes (Figure 1). This makes it one of the few immune factors at the front lines able to bind bacteria and viruses before they attach to the infant’s gastrointestinal tract. 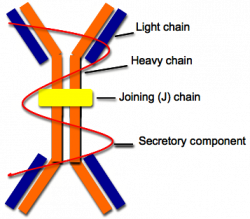 Figure 1. SIgA are dimeric, with two IgA molecules held together by a joining chain. Each IgA molecule is composed of two heavy chains and two light chains. The scretory component helps protect the antibody from being degraded in the infant’s gut.

New research suggests that there may be a second structural novelty in milk sIgA that gives it an additional edge over invading pathogens. A recent study by Sedykh et al. (2012) found that close to 20% of the sIgA present in human milk might be in chimeric form, or a combination of two different types of sIgA molecules. This finding goes against the current paradigm of immunoglobulin (antibody) structure. All immunoglobulins are composed of two heavy chains (larger polypeptide subunits) and two light chains (smaller polypeptide subunits). The amino acid structure of the heavy chain determines the class of immunoglobulin (i.e., IgA, IgD, IgE, IgG, IgM) and that of the light chain determines whether the antibody is categorized as lambda (λ) or kappa (κ). It has long been thought that the heavy and light chains were identical to one another—a λ-IgA molecule would have two IgA heavy chains and two λ light chains. But Sedykh et al. have found evidence to the contrary; some of the sIgA found in human milk are present as chimeras, composed of both λ and κ light chains (Figure 2).

Figure 2. An example of a chimeric milk sIgA molecule. Instead of identical light chains, sIgA chimeras have both λ and κ light chains.

The authors are not precisely sure when or how this half-molecule exchange of light chains occurs but emphasize that this is not an anomaly—17 (± 4)% of all milk sIgA collected from five mothers during early lactation (weeks 1 – 3) were λ-κ-sIgAs. They also call attention to the fact that these chimeras are not dysfunctional antibodies but rather can be more efficacious in binding antigens. Instead of having two identical binding sites, sIgA with both λ and κ chains are able to bind a greater diversity of antigens. Human milk may be unique among mammals in its high concentration of sIgA, but in the battle against pathogens, the best strategy isn’t always having more soldiers. An increased likelihood of being able to bind, and subsequently neutralize, antigens in the infant’s mucosal surfaces could provide a huge advantage to human infants.

The study focused on early milk samples that have been demonstrated to have significantly higher concentrations of sIgA than those of mature milk. It would be interesting to see if the concentration of chimeras decreases as lactation progresses as well. This could suggest an emphasis on diversification of antigen recognition during the time at which the infant’s immune system is most naïve.

Human infants are not unique in being born without a fully functional immune system, and as such, chimeric sIgA (or chimeric forms of other immunoglobulins) could be integral to infant immune defense in multiple mammalian species. However, it has been suggested that humans may be unique in having a greater concentration and greater diversity of immune factors, (e.g., oligosaccharides, Warren et al., 2001). Comparative studies on the light chain molecular structure of sIgA could provide additional data to evaluate this developing hypothesis.

There are still many important issues for immunologists to tackle, including identifying when sIgA molecules exchange λ and κ chains and the chemical signals that prompt them to do so. Despite this, researchers interested in the role of milk sIgA in infant immunity should not ignore the importance of the discovery of sIgA chimeras. Future studies should consider both antibody concentration as well as antibody molecular structure —it is intriguing to consider that both have been under selection to increase human infant immune response.