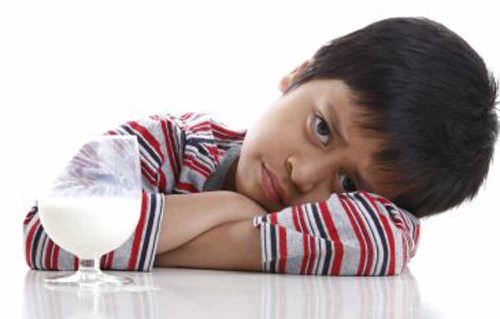 Rickets and vitamin D deficiency do not sound like 21st century issues. Yet nearly 100 years since the connection between the two was first identified, the U.S., Canada, and numerous other countries are facing a potential epidemic of vitamin D deficiency among children (1). The reasons for the resurgence are much the same as they were in the past: limited sunlight exposure and poor dietary intake of this essential nutrient. Vitamin D-fortified milk helped bring an end to the rickets epidemic in the early 1900s, and it remains the best dietary source of vitamin D for children today. However, a growing number of children do not drink cow’s milk. A handful of studies in the U.S. and Canada have found that children who avoid cow’s milk due to allergy, intolerance, or dietary preference for alternative milk beverages are at a greater risk for vitamin D deficiency (2-4). When coupled with medical advice to avoid the sun, these findings could help explain the increasing prevalence of vitamin D deficiency in otherwise healthy children. While scurvy may have gone the way of the pirate, rickets is still a modern concern.

Vitamin D is a term for a set of steroid hormones that help the intestines absorb calcium and phosphorus. Without sufficient levels of vitamin D, only 10-15% of dietary calcium and only 60% of dietary phosphorus are absorbed (5). Because calcium and phosphorus make up the mineral content of bone, a deficiency in vitamin D influences bone mass, and can ultimately result in rickets (bone demineralization) in infants and children. Vitamin D is important for many physiological functions beyond bone health, playing a role in innate immunity and prevention of several chronic conditions including cancer, diabetes, and cardiovascular disease (3, 5).

Vitamin D is unique among vitamins because it is available both from the diet and from ultra-violet (UV) light. Vitamin D is not metabolically active when ingested or absorbed in the skin; it must be converted to its metabolically active form, 25- hydroxyvitamin D (25 OHD), by the liver. Serum levels of 25 OHD are used to determine vitamin D status, with levels below 50 nmol/L considered indicative of deficiency, and levels above 75 nmol/L considered optimal for obtaining peak bone mass in children (1, 2, 5, 6).

Vitamin D deficiency among children has resurfaced as a major health concern. The reasons for this are two-fold. Firstly, health professionals recommend avoiding the best source of vitamin D—sunlight—because of the potential risks of skin cancer. Protective clothing and sunscreen can help prevent the formation of cancerous cells in the skin by blocking out UVB radiation, but this is the very thing that converts a chemical in the epidermis (called 7-Dehydrocholestrol) into vitamin D. Secondly, there are very few dietary sources of vitamin D. For growing children, the current dietary recommendation in the U.S. and Canada is at least 400 IU (international units) per day (recommendations for pregnant, lactating, and older adults can range anywhere from 400–1000 IU)(6). Fatty fish, such as salmon and tuna, are the best source, having between 500 – 1000 IU of vitamin D in a 3.5-ounce serving. Egg yolks and mushrooms also contain vitamin D, but larger portions are required to meet the daily-recommended values. For example, in order to get 400 IU of vitamin D, you would need to consume 10 eggs or around 5 1/2 cups of shiitake mushrooms (1). While fortified cow’s milk falls short of fatty fish (an 8-ounce cup of fortified cow’s milk in the U.S. contains 100 IU), it is the most common dietary source of vitamin D for children. In addition to its vitamin D content, cow’s milk also contains numerous other nutrients and bioactive components that play a role in bone growth, including calcium, phosphorus, whey proteins, and lactose.

What’s in your grocery cart?

But what about children who do not consume cow’s milk, either due to allergy, lactose intolerance, taste preference, or dietary practices (e.g., veganism)? With so few dietary options for vitamin D, it is not surprising that North American children who avoid drinking cow’s milk have been found to have lower serum 25 OHD levels than their cow’s milk-drinking peers (2-4).

Gordon and colleagues (3) analyzed serum samples collected from urban Boston infants and toddlers (8–24 months old) at well check visits (3). Of the 380 otherwise healthy participants, 40% were found to have 25 OHD levels below that optimal threshold of 75 nmol/L and over 12% were deficient (<50 nmol/L). The most important predictor for vitamin D deficiency among infants was breastfeeding without vitamin D supplementation and, among weaned toddlers, it was lower cow’s milk intake. With each additional 8-ounce cup of cow’s milk consumed per day (determined by dietary data provided by parents), serum 25 OHD increased 7.2 nmol/L.

Maguire et al. also identified an almost identical protective effect of cow’s milk consumption in their study of over 1300 healthy 2–5 year olds living in Toronto (2). For every 8-ounce cup of fortified cow’s milk consumed, serum 25 OHD levels increased by 5 nmol/L. They conclude that for children with lighter skin pigmentation, approximately 2 cups of fortified cow’s milk per day was sufficient to maintain serum 25 OHD levels above the 75 nmol/L threshold. Because of the interaction with skin pigmentation and vitamin D absorption (darker skin reflects more light and thus blocks out more UVB), children with darker pigmentation who were not taking vitamin D supplements would require about twice as much cow’s milk to maintain the same levels, especially in winter months in this high latitude location.

Taking it one step further, Lee et al. (4) were specifically interested in vitamin D status of children who avoid cow’s milk, and instead consume alternative beverages such as goat, soy, rice, or almond milk (which they refer to collectively as non-cow’s milks). Although many of these non-cow’s milks are fortified with vitamin D, it is not required, and therefore the levels can vary because they are not regulated. From 2008 to 2013, they collected dietary data and serum samples (as well as information on sun exposure and vitamin supplementation) from nearly 3000 healthy children between the ages of 1 and 6 years of age living in the Toronto area. All else being equal, children who consumed only non-cow’s milk were at a higher risk of having 25 OHD levels below 50 nmol/L than those who drank only cow’s milk (11% vs. 4%). They also identified a dose-dependent effect of non-cow’s milk consumption; every additional cup consumed was associated with a 3.1% decrease in serum 25 OHD. Around 18% of their study population consumed both types of milks, allowing them to test for a potential trade-off between the two types of milks. Consumption of non-cow’s milk did indeed appear to modify consumption of cow’s milk, with a 4.2 nmol/L drop in 25 OHD with each additional 8-ounce cup of non-cow’s milk consumption reported for children who also consumed cow’s milk.

One major limitation acknowledged by each of these studies is that they are cross-sectional in design and therefore cannot establish causality. However, that they all converge on the same finding—a protective effect of cow’s milk on vitamin D status—is strong support for a relationship between the two variables. Another potential limitation is that results may only be applicable to North American populations living at higher latitudes, like Boston or Toronto, where availability of vitamin D from the sun would be more seasonal than at locations closer to the equator. Vitamin D deficiency is, unfortunately, a global problem (6), suggesting latitude is not the most important predisposing factor.

Putting the D into diet

There is strong evidence to suggest that avoiding cow’s milk negatively affects vitamin D status among North American children. Many families may select cow’s milk alternatives such as soy, almond, or rice because of perceived nutritional benefits or taste preference, while others do so because of allergies or intolerance to cow’s milk. Regardless, education from health care providers about the potential nutritional differences and the need for supplementation is clearly needed. But because compliance with supplementation can be challenging, and with a growing public interest in cow’s milk alternatives, Lee et al. (4) suggest that both the U.S. and Canada consider mandatory vitamin D fortification of these milk alternatives. With so many different manufacturers and variation in how these milks are produced, this is not as simple of a solution as it may sound. But with something as critical as childhood bone health hanging in the balance, it seems well worth the effort.