Cheese and Butter Have Different Effects on LDL Cholesterol 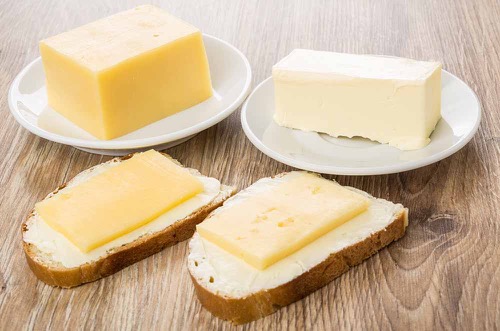 Saturated fatty acids (SFAs) have long been considered detrimental to cardiovascular health, with dietary guidelines advocating for a restriction of dietary SFAs to reduce the risk of cardiovascular disease (CVD) [1]. However, increased consumption of SFAs may not always be associated with increased CVD risk, and the effects of SFAs on CVD risk may instead depend on the food source [2-5].

A new randomized control trial conducted by Professor Benoit Lamarche of Université Laval compared the cardiometabolic effects of consuming saturated fats in butter compared with consuming saturated fats in cheese [6]. “The basis of this project was the controversy about the effects of saturated fats on cardiovascular disease,” says Didier Brassard, a graduate student in Lamarche’s laboratory and the first author of the new study. “So the idea was to compare two different food sources of saturated fats, which in our project was butter compared with cheese, as well as to compare that with other nutrients,” he says. In addition to cheese and butter, the researchers also gave participants diets rich in monounsaturated fatty acids (MUFAs), polyunsaturated fatty acids (PUFAs), and carbohydrates.

Brassard and his colleagues compared the effects of these five diets on a number of cardiometabolic risk factors, including blood lipid concentrations and blood pressure. “One of the most interesting findings of this paper was that butter induces a significantly greater increase in LDL cholesterol than cheese,” says Brassard. “So saturated fat in cheese and saturated fat in butter do not behave the same when they are digested,” he says. “A new thing was that the effects occurred especially among the people who had a greater concentration of LDL cholesterol to start with,” says Brassard.

HDL cholesterol concentrations were similar after the cheese and butter diets, although they were significantly higher than after the carbohydrate diet. There was no significant difference between the effects of the diets on inflammation markers, blood pressure, and insulin-glucose homeostasis.

The differences in the effects of butter and cheese are consistent with previous studies. “Other randomized control trials in the past have shown that saturated fats in butter and cheese behave differently when they are eaten in equal amounts,” says Brassard. In addition, a meta-analysis showed that for a similar intake of saturated fats and ratio of SFAs to PUFAs, the consumption of hard cheese significantly reduced LDL cholesterol and HDL cholesterol compared with butter [5].

The researchers hypothesized that the cheese food matrix was responsible for the attenuation of the cardiometabolic effects associated with the consumption of SFAs. Previous studies suggested that the beneficial effects of certain dairy products on CVD risk appear to be mediated by the dairy matrix [7]. “There are also randomized control trials that supported the idea that the food source and the food matrix may influence the effect of saturated fats on health,” says Brassard [4].

The researchers tried to estimate the effect of the cheese matrix on cholesterol. “The whole idea was just to look at how much saturated fat was in the diet, and based on previously published equations, compare the predicted effect on LDL versus what was observed,” says Brassard [8]. “What was predicted and the observed concentration were different,” he says. “What we can say is that there are nutrients in cheese that are reducing the overall effect of saturated fats so that they do not induce as much change in blood lipids compared with butter,” says Brassard.

“What we show in this paper is that the food matrix matters, as different foods with the same nutrients can have different effects on cardiometabolic risk factors, mainly blood lipids and LDL cholesterol,” says Brassard. “So it’s important to look beyond nutrients and think in terms of foods,” he says.

These studies add to the growing evidence that the food source of saturated fats is important in assessing their health impacts. “From a public health perspective, it’s important to look beyond nutrients and think in terms of food, because different foods have different effects, and this is another example of that,” says Brassard.

8. Mensink R.P., Zock P.L., Kester A.D., Katan M.B. Effects of dietary fatty acids and carbohydrates on the ratio of serum total to HDL cholesterol and on serum lipids and apolipoproteins: a meta-analysis of 60 controlled trials. Am J Clin Nutr. 2003 May;77(5): 1146-55.