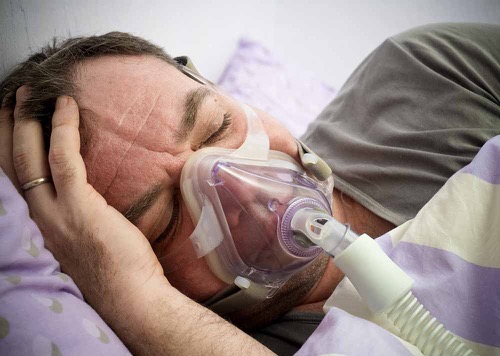 Drinking warm milk at bedtime to help you fall asleep might be a myth, but dairy foods playing a role in improving sleep could be a reality. The warm milk myth likely came from the finding that cow milk contains tryptophan, the same amino acid thought to make people sleepy after eating Thanksgiving Day turkey. Foods with tryptophan have not shown the same sleep-inducing effects as pure tryptophan. But milk has many other ingredients that could potentially influence the symptoms of sleep apnea, a sleep disorder where breathing stops and starts numerous times during sleep due to relaxed throat muscles.

In a newly published report [1], researchers investigated the potential effect of diet on the severity of sleep apnea. Overweight and obesity are considered the largest risk factors for development of sleep apnea [1-3]. However, not all individuals that suffer from this sleep disorder are overweight, an observation that prompted Hynes and colleagues to hypothesize that certain food types could also be risk factors [1].

Over 100 study participants completed four dietary surveys and one sleep study that measured the number of breathing interruptions per hour of sleep (called the Apnea-Hypopnea Index or AHI); an AHI of 5–15 is considered mild disease, 15–30 is moderate, and >30 is considered severe sleep apnea [1]. In addition to identifying foods that are associated with higher AHI scores (e.g., processed meats), Hynes [1] reports that study participants that had two servings of dairy a day had lower AHI scores, and thus less severe sleep apnea.

Why would processed meats make sleep apnea worse whereas dairy foods might lessen the severity? Hynes [1] suggests both relate to inflammation. Several studies have found that, compared with controls, sleep apnea patients have increased serum levels of inflammatory markers such as tumor necrosis factor-α (TNF-α), interleukin 6 (IL-6), and interleukin β (IL- β) [reviewed in 4]. Processed meats are believed to contain inflammatory compounds that can further increase the levels of these inflammatory markers in the body [5, 6], which could in turn influence the severity of sleep apnea.

In contrast, dairy foods contain numerous nutrients and compounds with anti-inflammatory properties, including calcium, vitamin E, polyunsaturated fatty acids, and the amino acid leucine. Several studies support Hynes’ finding that simply meeting dietary guidelines for daily dairy intake may have an anti-inflammatory effect. For example, a large prospective study of 3000 Greek adults found that serum markers of inflammation (TNF-α and IL-6) were significantly lower in individuals that consumed >14 servings of dairy per week compared with those consuming <8 servings [7]. Moreover, an intervention study [8] on overweight and obese adults with metabolic syndrome found that consuming 3.5 servings compared with just 0.5 servings of dairy per day significantly reduced inflammatory stress independent of weight loss. Finally, Hynes [1] highlights research that demonstrates the effect of low-fat dairy on the prevention of gout, presumably by inhibiting the inflammatory response responsible for the creation of urate crystals in the joints.

Such investigations don’t just stand to make some people better rested. Sleep apnea, believed to affect between 3% and 7% of the U.S. population, is considered a risk factor for development of cardiovascular disease, hypertension, and type 2 diabetes [3, 4]. Simply identifying which foods make sleep apnea better or worse could have downstream effects on the development of these deadly chronic diseases.