Buttermilk as a source of protective glycolipids 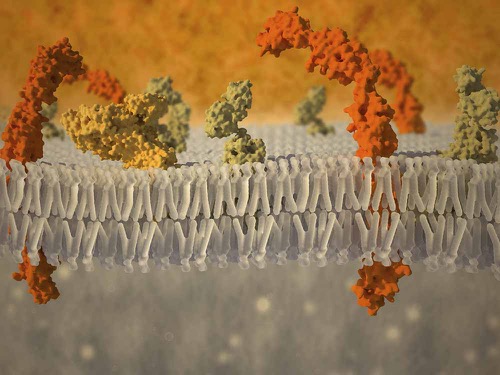 Is fat really bad for you? Or could some fat actually be good for your tummy? The common answer might be “That’s impossible.” But is it? It turns out that one type of milk fat only recently being studied may be especially beneficial for intestinal health. Here is the story.

The human intestinal surface is covered with a layer of complex sugars that act in part as signaling molecules. That is, they transmit information between the cells of multi-cellular organisms. In the sugar layer of the intestines, there are abundant membrane lipids also covered with sugars, and they represent 30-40% of total lipids in the intestinal mucosa. These hybrid molecules that contain both lipids (fat) and glycans (carbohydrates) are called glycolipids. Although originally discovered in the brain, glycolipids are found in virtually every vertebrate tissue, but are especially abundant on the surface of intestinal mucosa.

Recent observations from animal studies show that an inflamed intestinal mucosa has lost many of those glycolipids compared to a healthy intestinal mucosa [1]. Unfortunately, the rapid degradation of glycolipids in the intestine, typical of inflammatory intestinal diseases, is associated with a further increase in pro-inflammatory signaling, inflammatory markers, and susceptibility to pathogens. Conditions like necrotizing enterocolitis (in infants), inflammatory bowel diseases, and Crohn’s disease (in adults) are becoming a new health problem, affecting over 1 million Americans each year. Because neither surgical nor drug interventions cure these diseases, there are increasing demands for new treatments.

One clinical study has already shown the positive role of dietary glycolipids in pre-term infants using glycolipids extracted from porcine brain [2].  However, the estimated average intake of glycolipids by a population not consuming brains is below levels believed to provide therapeutic benefit.  Could these precious glycolipids be extracted from brains? Not without exhaustive safety testing that would require decades of investment. A limiting factor in moving this field to the marketplace is the inability to find commercially viable sources of these materials that will allow researchers to move into clinical trials and demonstrate in vivo bioactivities.

So, researchers are asking the new question: is it possible to find glycolipids, identical to our protective lipids in the intestinal mucosa, in the food that we eat? Could these dietary glycolipids replace those lost during development inflammatory diseases and re-establish the protective activity? The initial answer is: it appears to be indeed possible.

Glycolipids are also found in milk. The positive effects from nutritional supplementation of glycolipids’ in newborns are most likely related to the prebiotic functions of glycolipids, as well as their contribution to an intestinal immune response and service as decoys for toxins [3]. Milk glycolipids have been studied for several years by researchers worldwide; despite their importance to health, isolating them and analyzing their structure is exceptionally challenging. Only recently have we acquired the ability to really understand their structure in detail and to prove that they are identical to the intestinal membrane glycolipids [4]. New results from data collected through advanced mass spectrometry indicate that milk glycolipids have the same structure as those in the human intestinal mucosa, GM3 (NeuAcα2-3Galβ1-4Glcβ-Cer) and GD3 (NeuAcα2-8NeuAcα2-3Galβ1-4Glcβ-Cer), respectively. Therefore, restoring proper glycolipid abundance and function in the intestine through the consumption of milk could resolve inflammation, increase resistance to infection, and improve gut integrity to induce remission of all gut inflammatory diseases.

Will drinking store bought milk provide the desired benefits?  The answer to that question is, unfortunately, no. The amount of glycolipids in store-bought milk is too low to elicit bioactive action. However, there is another possibility for recovering and concentrating these molecules from milk.

If buttermilk were to be used in clinical studies to demonstrate enhanced quality of life for people suffering from intestinal diseases, it could become the new star of the dairy industry!