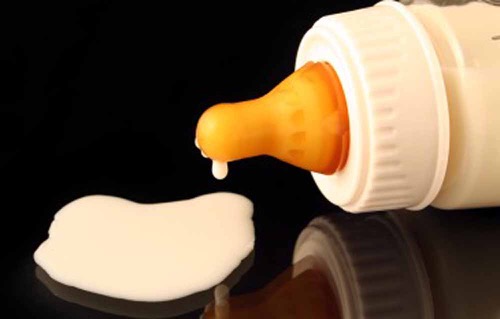 Cow’s milk, wheat flour, and sugar mixed together was the first recipe whipped up by Henri Nestlé’s in the mid-1800s marketed as “farine lactée.” However, infant feeding-practices have been widely variable historically and cross-culturally for thousands of years, if not longer (1). Infants have been fed combinations of animal milks, cereal grains, meat broths, juices, tea, and a diversity of supplemental culturally specific infant foods (1). More recently, improved research instruments and techniques have yielded new information, leading to the reformulation of commercial artificial breast milks. Infant formula now typically includes long-chain polyunsaturated fatty acids (LCPUFAs) (2) and lactorferrin (3,4). Versions of formula that feature prebiotics and probiotics are also commonly available (5,6). Might bovine osteopontin be the next ingredient to be added to infant formulas?

Recently Donovan and colleagues expanded our understanding of how consumption of osteopontin during in early life affects infant biology (10). In an experimental monkey model, researchers evaluated numerous developmental systems in the context of breastfeeding, formula-feeding, and the differences between formula with and without bovine osteopontin (bOPN). Infants were reared either by their mother, or reared in an infant nursery using standardized methods (11). Within the nursery context, infants were fed either a standard control infant formula as commercially available, or supplemented with bOPN for the first three months of life. This is a particularly strong study design because there were “within nursery” comparisons. For over six decades, psychologists have demonstrated the numerous behavioral, psychological, and neurobiological differences that emerge when infants are nursery-reared (11). These differences cannot be explained solely by the different early life diet, because limited social environment, absence of maternal behavioral care, and restricted maternal microbial exposure are substantially different between nursery-rearing and mother-rearing conditions.

Importantly however, the breastfed and formula-fed groups showed many similarities. Infants in the three groups had similar body weight, body length, and bone mineral density. The three groups also had similar abilities to deliver oxygen to their organs as measured by red blood cell counts and hemoglobin concentration. On a macro-level, their immune systems were similar; all groups had the same total number of white blood cells, although there were some differences in the specific types of white blood cells between the formula-fed groups and the infants consuming mother’s milk. Breastfed infants had a higher percent of neutrophils— first-response immune cells to microbial infection. Accumulations of dead neutrophils at the site of an infection are more colloquially referred to as “pus.” Breastfed infants also had slightly lower percentages of lymphocytes, adaptive immune cells “programmed” to selectively target specific pathogens more commonly called “antibodies.”

A more nuanced investigation of the transcriptome of the intestinal tract revealed other important differences among the groups. Differences were present in the expression of genes that influence immune system, cell cycle, cell motility, neuronal development, and protein processing (among others). In all, over 1000 genes were differentially expressed between the breastfed group and the formula fed groups, with expression generally greater in the breastfed infants vs. formula-fed infants (88% vs. 12%). However, infants fed bOPN formula fell intermediate between the breastfed and control formula-fed groups on nearly half of the differentially expressed genes. These results demonstrate, in a controlled setting, that the addition of bOPN to formula shifted intestinal gene expression in infant monkeys toward the “typical” developmental patterns of breast-fed baby monkeys.

Given the major differences in early environmental contexts between the nursery and mother-rearing, that the inclusion of one milk constituent contributed to a partial “recovery” of typical infant development in the intestinal tract is incredibly gratifying. These results motivate further research beyond investigating the expression of these genes in cells in the intestinal tract, but expanding into other areas of the body, particularly the brain. Given the bidirectional communication along the gut-brain axis, we can predict that changes in gene expression in the gut may be paired with changes in gene expression in the brain.

As animal scientists continue to investigate the potential benefits of bOPN in formula, food and dairy scientists can identify and optimize dairy streams to recover these proteins for economical availability for use in infant formulas. The marriage of basic research in lactation biology with innovations in dairy science will continue to improve infant formula. Fortunately, the sophistication of the experimental “guess and check” has exponentially advanced since Henri Nestle took his crack at it nearly 200 years ago.

4. Lönnerdal, B. Infant formula and infant nutrition: bioactive proteins of human milk and implications for composition of infant formulas. The American journal of clinical nutrition. 2014;99(3), 712S-717S.

5. Braegger, Christian, et al. “Supplementation of infant formula with probiotics and/or prebiotics: a systematic review and comment by the ESPGHAN committee on nutrition.” Journal of pediatric gastroenterology and nutrition. 2011;52.2: 238-250.