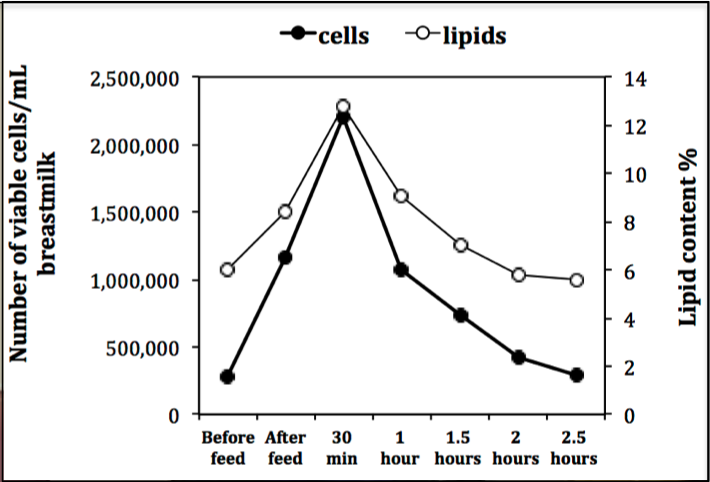 Unlike formula, breastmilk composition is dynamic, responding to milk removal that occurs during breastfeeding. This plasticity of breastmilk composition may be key to early infant growth and programming of development. An exciting new study demonstrates how removal of milk by the infant stimulates changes not only in the lipid composition but also the cellular components of breastmilk. This knowledge now sets the basis for new clinical interventions aimed at improving health outcomes of compromised infants, such as those born prematurely.

The milk of each species is unique

Breastmilk is so much more than nutrition, containing molecules that protect the infant as well as epigenetic modulators that program development1, 2. The milk of each mammalian species has a unique composition that evolved over millions of years to suit the needs of the young for which it is intended1, 3. This is reflected in the large variations in both lactation strategies and milk composition among different mammalian species3, as well as in pathologies that often result from the consumption of milk of one species by another4, 5. In addition to interspecies variations, milk composition varies within species6. For example, maternal diet is known to influence breastmilk fatty acid composition7. Even more intriguing, breastmilk composition varies within an individual mother, with these constant changes potentially facilitating important physiological functions.

The fascinating fact that milk composition changes constantly during periods as short as a breastfeed8, 9 and as long as the entire lactation period2, 10, 11 gives rise to speculation of whether these changes benefit the infant or simply reflect physiological changes associated with the synthesis of milk. New studies now reveal that these changes in milk composition are more extensive than once thought. We have known that breastmilk lipid content fluctuates throughout the day in response to infant feeding such that prior to a feed, when the breast is fuller, the milk has lower lipid content than immediately after a feed when the breast is emptier12, 13. However, empirical evidence from our laboratory had indicated that breastmilk expressed some time after the end of a feed often had higher lipid content than the breastmilk obtained immediately post-feed. This seemed to be related to the milk volume removed during the feed, with larger feeds showing a more marked response. Naturally, we were curious to investigate this further.

Breastfeeding mothers from different stages of lactation were recruited and asked to provide a small breastmilk sample prior the first morning feed, immediately after the feed, and then at 30-minute intervals for the next three hours after the feed14. We examined how breastmilk lipid content changed during this period and coupled this with measurements of the cell and protein contents of breastmilk. The aim was to elucidate how the degree of breast fullness affected breastmilk composition.

All examined feeds were of more than 52 ml of milk. In all mother-infant dyads, the lipid and cell contents immediately after the feed were higher compared to pre-feeding, but the highest lipid content of breastmilk was seen 30 minutes post-feed, after which it gradually dropped as the breast synthesized milk and refilled. Exactly the same response was seen for breastmilk cell content. This very close association between the cell and lipid content of milk and the corresponding changes in response to breast emptying was indeed remarkable! The increase of lipid and cell contents at 30 minutes post-feeding was several fold higher compared to the pre-feed values14. Interestingly, the rate of decrease of lipid and cell content after the 30-minute maximum was different between mothers, something that can be used to determine individual rates of milk synthesis.

This new study now clearly demonstrates that the degree of fullness of the breast is closely associated with breastmilk lipid and cell contents across different times of the day and lactation stages, potentially reflecting a dependence of breastmilk content on feeding history and milk synthesis rates of the breast. But how is this effect mediated?

The previous observations of the increase in milk lipid content immediately after a feed had led to two hypotheses to explain this phenomenon. The filtration theory proposes that fat globules cluster and adhere to the walls of the alveoli and ducts and are then filtered out as milk is gradually removed during breastfeeding or breastmilk expression15. The adsorption theory suggests that fat globules remain adsorbed to the membranes of the alveolar cells and get displaced only when the gland is nearly empty16-18.

Given that milk cells also form clusters like milk lipids19, 20, it is possible that these theories may also hold for the increase in breastmilk cell content immediately after a feed. However, the 30 minute post-feeding peak of breastmilk lipid and cell contents can only be explained by these theories if one assumes that milk fat globule and cell clusters remaining attached to the epithelium after feeding are washed off into the milk within those first 30 minutes after a feed14.

Both of these theories base their mechanistic explanations solely on the physicochemical phenomenon of milk removal from the breast. Perhaps a more likely explanation could involve both the physical process of milk removal from the mammary gland and the biology of milk synthesis. In the current study, breastmilk protein content did not respond to feeding in a systematic manner; however, there were strong inter-individual variations in protein responses to feeding, from no change to increases at various time points after a feed. Given that protein is soluble in milk, these protein content changes cannot be explained by the physicochemical phenomena proposed by the adsorption or filtration theories14.

Consequently, a biological, rather than physical, response of mammary cells to milk removal is an attractive alternative mechanism to explain the changes observed in breastmilk composition in response to feeding. In this context, we have previously shown that gene expression in the mammary gland changes in response to feeding21, a finding consistent with recent studies in the dairy cow showing that milking induces changes in gene expression in the mammary gland22, 23. These changes in gene expression are reflected not only in milk cell content but also cellular composition14, 23 and may be related to the changes in lipid content post-feeding.

Physiological significance for the breastfed infant

How does the variation in milk composition affect the infant? Intra-species variations are buffered by both the mobilization of maternal somatic nutrient stores and the changing needs of the infant, resulting in personalized breastmilk that reflects the balance between maternal diet, metabolism, transport and secretion, and meets the growth and developmental requirements of the term infant during the early postnatal period24. Thus, in addition to understanding the mechanisms mediating feeding-induced changes in breastmilk composition, it is important to elucidate the physiological significance of these changes for the breastfed infant. The post-feed increase in milk lipids is implicated in short-term appetite control as well as the development of the infant’s appetite control system, although these require more rigorous study14, 24. However, the role of milk cells for the infant is not yet clear. It was recently established that breastmilk contains a cellular hierarchy, from pluripotent stem cells to progenitor cells to more differentiated mammary cells25, 26. Investigations of the function and properties of these cells are ongoing in our laboratory, and the changing breastmilk cell composition in response to feeding may provide appropriate time points for the harvesting of the different cell populations for specific research and application purposes21, 27.

Implications for the preterm infant

Although term milk meets the growth and nutritional requirements of the term infant, preterm milk does not meet the requirements of the preterm infant to grow at a rate equivalent to intrauterine growth. This has led to preterm milk fortification to promote infant growth and survival. The unexpected finding of increased lipid and cellular content 30 minutes post-feeding opens up new avenues for optimization of the nutritional care provided to the preterm infant. Clinically providing selective portions of expressed breastmilk higher in lipids and live cells has the potential to provide beneficial outcomes in regard to the growth and development as well as health of preterm infants.

Quite simply, it is astounding that the mammary gland has the unique ability to produce milk that dynamically responds to changing infant needs and the interplay between the mother and the infant during breastfeeding. Our work highlights the unique dynamic composition of breastmilk that contains live components such as maternal cells, which may provide valuable developmental signals to the growing infant, which are absent in formula. Thus, these new findings urge us to improve women’s experiences of lactation in order to extend the period of breastfeeding, with the goal of ensuring maximal health benefits to both the mother and infant.