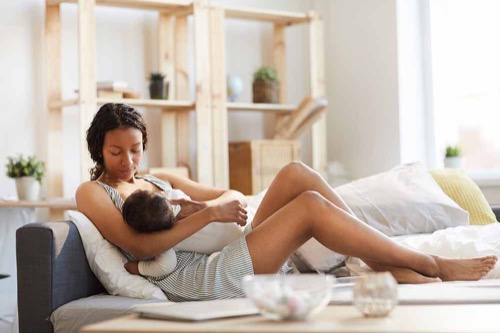 Recommendations from both the World Health Organization (WHO) and the American Academy of Pediatrics (AAP) to breastfeed exclusively for the first 6 months of life were developed to optimize infant health. But new research [1] suggests the mother’s health may benefit from following these breastfeeding guidelines as well.

A study of over 100,000 women found that exclusively breastfeeding for at least 6 months lowered the risk of early menopause (defined as menopause before 45 years of age) [1]. Early menopause is not a concern simply because of the symptoms related to hormonal changes; menopause before age 45 has been associated with an increased risk of cardiovascular disease, neurological diseases such as Parkinson’s, osteoporosis, and an increased risk in overall mortality [2].

The age at which a woman experiences menopause—clinically defined as 12 months from the cessation of menses—varies across populations due to biology (e.g., the number of oocytes she is born with, how quickly those oocytes are depleted, hormone levels) and the interaction of these biological factors with culture (e.g., smoking, body weight, nutrition, use of oral contraceptives) [3]. Reproductive events such as pregnancy and breastfeeding have the potential to influence the rate of oocyte depletion because both interrupt ovulation. During pregnancy, higher levels of estrogen inhibit the production of follicle stimulating hormone (FSH), a hormone necessary for releasing an oocyte from the ovaries. Milk production, in itself, does not necessarily inhibit FSH. Instead, the resumption of ovulation depends on nursing intensity. Although this intensity was originally thought to be represented by how frequently an infant nursed, it is now better understood as relating to how much of a mother’s energetic budget she “spends” on milk production [4]. Maternal hormones, including prolactin, will inhibit ovulation when the energetic demands of milk production are high relative to the mother’s overall energetic budget. This explains why ovulation is usually suppressed during the first months of lactation when mothers are providing the infant’s only form of nutrition and the daily energetic cost is estimated to be near 500 kilocalories [3].

The most recent study to examine the relationship between reproductive factors that suppress ovulation and timing of menopause is also the largest to date and one of the few to be prospective in design [1]. Unlike cross-sectional studies that look across a study population at one point in time and rely on recall data, prospective studies recruit participants before the outcomes of interest occur, allowing for a better understanding of cause and effect.

The study population comes from the Nurses’ Health Study II, which recruited 108,887 premenopausal nurses between the ages of 25 and 42 years old and collected data every two years, between 1989 and 2015, on life history events, diet, smoking, and other important variables that influence menopause. Parity was defined as the number of pregnancies lasting more than six months. The data on breastfeeding was more detailed so the researchers could identify exclusive and intense breastfeeding behavior, as this is most likely to suppress ovulation. They asked participants about the timing and use of formula, introduction of solids, if and when pumping was introduced, and when infants stopped nursing at night. With this information, they were able to discern cumulative exclusive breastfeeding, or how long the mothers provided only breastmilk and no other liquids or solids, across all of their offspring, compared with cumulative total breastfeeding, or the sum of exclusive and nonexclusive breastfeeding.

Another important finding of this study was that the effect of exclusive breastfeeding on the risk of early menopause was not linear. Risk reached a threshold somewhere between 6 and 12 months of exclusive breastfeeding [1]. This finding makes sense biologically because the energetic cost of breastfeeding over time is also not linear. As an infant grows and their energetic requirements increase, human mothers do not respond by producing more milk or making higher energy milk. Mothers simply could not keep up with those energetic demands [6]. Instead, infants are supplemented with other foods and liquids, usually around the six-month mark. At this time, the daily energetic cost to the mother decreases and, for many but not all mothers, the hormonal stop signs for ovulation are removed.

Breastfeeding has been shown to decrease the mother’s risk of stroke, cancer, and cardiovascular disease [7]. And now a large, prospective study [1] suggests that following current public health guidelines to nurse exclusively for six months can decrease a woman’s risk of early menopause. Public health initiatives aimed at increasing the number of women who breastfeed for at least six months should emphasize the positive benefits to both maternal and infant health. The results of this study also speak more broadly to the need for public policy that supports a mother’s ability to meet this breastfeeding milestone, such as longer paid maternity leave.

4. Valeggia C, Ellison PT. 2009. Interactions between metabolic and reproductive functions in the resumption of postpartum fecundity. American Journal of Human Biology: The Official Journal of the Human Biology Association 21(4): 559-566.