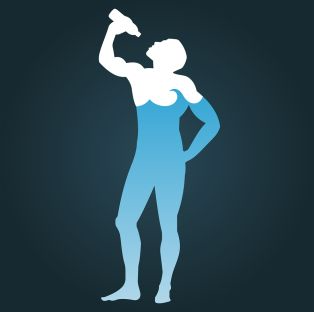 What do explorers in the Sahara Desert and cops on a stakeout have in common? They would both benefit from knowing which beverages are best at promoting fluid retention. The explorers can only carry so much liquid. The cops have few opportunities to urinate. They both need to stay hydrated.

This kind of information is exactly what a team of British researchers set out to provide [1]. Led by Ronald Maughan of Loughborough University—an institution that is known for its sports science—the group has proposed an index that describes how well a normally hydrated, healthy person retains the water in a beverage. The idea presumably, is not only to guide the decisions of desert explorers, and police officers hiding in vans—it would also help canoeists, dingy sailors, actors playing roles requiring an all-in-one bodysuit—and anyone trying to break a record for the longest uninterrupted time doing anything.

The researchers present hydration index calculations for thirteen common beverages [1]. To perform these calculations, they first gathered data on how the human body responds to the consumption of those beverages by running a randomized, controlled trial.

Seventy-two young men of roughly the same height and weight were primed for the experiment, by fasting overnight, emptying their bladders upon waking, and then consuming half a liter of still mineral water over a period of fifteen minutes. This ensured they were all equally hydrated at the start of the experiment. After arriving at the lab, the young men were asked to ingest a liter of an assigned beverage over half an hour, and to empty their bladders on the hour, every hour, as the researchers took various measurements.

Every participant followed this routine four times. On one occasion, their assigned beverage was a liter of still water, to serve as a control. Three other days, they received a different test beverage that was randomly selected from a list: sparkling water, Coca-Cola, Diet Cola, sports drink (Powerade), an oral rehydration solution, orange juice, beer, coffee, hot tea, cold tea, full-fat milk, and skimmed milk.

When it came to keeping people hydrated over time, the results for milk were the most impressive. Overall, the data showed that three of the test beverages were consistently better than water at this. One was obvious—the oral rehydration solution, Dioralyte, which is a medical product designed specifically for that task. But the other two were skimmed and full-fat milk, with the full-fat milk recording a Beverage Hydration Index approximately equal to that of the oral rehydration solution. Even when the index was calculated in such a way as to take into account the exact amount of water in milk—which is arguably required to compare like with like, given that milk contains things other than water, such as fat, protein, and sugars—the benefits of hydrating with milk over water were still highly significant.

Of the other beverages tested, orange juice fared the best. It scored roughly as well as water, and at one time point, it was a slightly better. All the rest of the test beverages, however, scored worse—including the sports drink, Powerade, as well as beer, coffee, tea, Coca-Cola, and Diet Coke.

Why would milk be so good for hydration? For one thing, it doesn’t contain diuretic agents like caffeine and alcohol. But what makes it even better at the job than water is probably its blend of electrolytes, plus its small amounts of protein and fat that require breaking down in the gut. The latter fact means that the water in milk entered the blood more slowly than the other drinks did. Which, in turn, means that there is a less dramatic fall in the osmotic pressure of blood. And because a drop in osmotic pressure has a diuretic effect, drinking milk makes one urinate less than drinking water. Other researchers have looked into this effect specifically in the context of replacing fluids lost during exercise [2].

A beverage hydration index might offer a new way to encourage people to think about their hydration levels, and to drink products that are better for their health than beer, coffee, and cola. One could imagine it added to beverage packaging, rather like nutrient content tables are at present. After all, inadequate hydration has been linked to all kinds of bodily disorders—not just to headaches, but to gastrointestinal and circulatory problems, too.