“Before I Came Here, I Didn’t Know That”: Highlights From the 15th IMGC Symposium 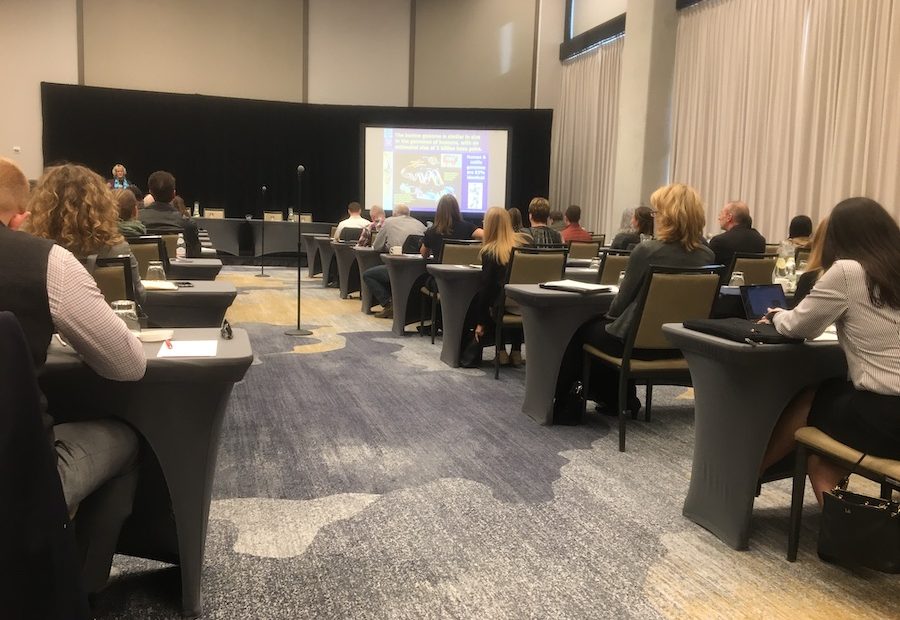 This year marked the 15th annual IMGC International Symposium, held in downtown Sacramento, California, November 13–15. In spite of noticeable haze outside from the nearby wildfires, researchers, graduate students, and scholars from around the world found community and collaboration inside the beautiful conference center. Twenty-six presentations and 25 posters were complemented by panel discussions, luncheons, and a group dinner and tour of the Golden 1 Center, home of the Sacramento Kings. As in years past, the symposium offered both seasoned and novice researchers a dynamic forum for exploring the innovations and implications of milk science research. Here are some of this year’s highlights.

1. In his welcome address, Bruce German recapped the history of the symposium, emphasizing its foundations in cross-connections among research fields. He noted that milk science has always been “a multi-disciplinary challenge” and that the IMGC Symposium itself has been a place where the complexities of that challenge have been explored. A brief tribute to Dr. Gonca Pasin and Gregory “Butch” Dias, Jr. was an opportunity for all to remember two of the symposium’s most ardent supporters, and most memorable personalities. Toward the end of the conference, Dr. German pointed out one attendee’s comment, “Before I came here, I didn’t know that,” encapsulated the importance of the symposium as a site of networking among experts across so many different fields.

2. The conference opened with “Hot Topics” that show the breadth of research currently underway, and some of the most exciting discoveries happening around the world. Danielle Lemay presented an overview of SPLASH! and its most popular articles in 2018 so far, including camel milk, innate lymphoid cells, and A2 milk. Since its first issue in 2012, SPLASH! has published more than 317 articles and is read by more than 3000 subscribers across the globe interested in maternal and neonatal health, integrated dairy production, and multi-omics—all of which were covered in the other “hot topic” talks. In his study of nicotinamide riboside supplementation on NAD and NAD-related co-enzymes, Charles Brenner demonstrated the importance of this component of energy mobilization in lactation. Oral supplementation has shown immediate and longer-term benefits to both offspring and mothers, which suggests a breakthrough in understanding postpartum metabolic processes. John Finley used visual art to help illustrate the Grand Challenge to connect the priorities of the dairy industry with problems and issues in public health and the environment, and he emphasized the current USDA strategy to take an integrated, interdisciplinary approach using complex system analytics to integrate modern dairy management into this scheme. Breast milk composition and underlying maternal genetic variation were the focus of Janet Williams’s investigation of data from the multi-center INSPIRE study, which includes samples collected from over 400 women from around the world. This is the first report on genetics from the study and highlighted genetic associations with total milk oligosaccharides, lactose, and protein content.

3. This year’s conference covered research in genetics and genomics. A number of presentations highlighted studies of the bovine genome, including current research on milk oligosaccharide profiles (Poulsen), milk fat profiles (Larsen), and phospho-caseins (Visker). Lotte Bach Larsen and colleagues continue their analyses of Danish dairy breeds via the Danish-Swedish milk genomics project. These studies have a common goal of evaluating the potential to use genomic selection to fine tune various properties of milk to improve processing characteristics, particularly for cheese production. Turning to human milk, Ashwantha Kumar Enjapoori and his colleagues examined beta-casomorphin peptides, including BCM-10 and BCM-11, in breast milk. They showed that these bioactive peptides are generated via endogenous milk protease activity in the mammary gland.

4. Application of biotechnology in livestock is undoubtedly one of the most compelling—and controversial—fields of research. Keynote speaker Alison L. Van Eenennaam reviewed some key improvements in food production that have arisen from scientific advances, and presented a rousing expose of the regulatory approval decisions concerning application of the most revolutionary molecular technology of recent times, CRISPR/Cas9 in animals. It seems that any animal with a modification in its genome, whether a null variant or a natural variant, is to be considered a drug by the FDA! Authorities from other jurisdictions around the world have been equally challenged by this advance in technology, and have implemented different but substantially divergent decisions.

5. Day two of the program began with a presentation from Steven Frese and Jennifer Smilowitz on the impact of probiotic supplementation of a naturally-occurring Bifidobacterium longum subspecies infantis on gut microbial colonization in infants (the IMPRINT study). Children fed the probiotic showed correction of dysbiosis in developing gut microbiota, including down regulation of antibiotic-resistant species. Analysis of stools from these children showed changes in metabolite profiles compared with children in the study who did not receive the supplement, indicating improvements in digestion, and they also found evidence of increased human milk oligosaccharide-derived energy mobilization and reduced intestinal mucin degradation. Importantly, the general well-being of the supplemented children was improved, with better consistency and a reduced frequency of stools. Diana Taft reported on her findings of gut microbiota in diverse samples collected from sites in USA, Europe, Gambia, and Bangladesh. The study profiled multiple complex microbial patterns, but Diana was particularly focused on prevalence of Bifidobacterium longum subspecies infantis. Using classical measures of transmission, she found that prevalence of this microbe may be dependent on breastfeeding duration. The morning session was concluded by a presentation from PhD student Alok Kumar from Hyderabad. Following from his supervisors own studies as a student in Australia, he presented on anti-microbial bioactivity of milk from the platypus, a representative of the most ancient mammals, the monotremes. Analysis of the physical properties of the milk-derived protein known as EchAMP, a member of the cathelcidin family, showed that the bioactivity of the protein is likely to arise from a helical conformation within the protein structure.

7. Milk glycans were once again represented at the conference. Carlito Lebrilla surprised the audience by revealing the glycan composition of a lot more than just milk, profiling hundreds of whole foods. Ishita Shah presented new data on milk oligosaccharides, and how they keep gut cells together and alter the response to pathogens.

8. Presentations on the final day of the conference highlighted milk lipids. In her overview of milk fat globule membranes, Sophie Gallier discussed the results of her team’s study of MFGM-supplemented formula and its effects on cognition in infants up to 12 months of age. Student Travel Award recipient Lauren Brink furthered this consideration with her research on the different variations of MFGM components in commercial infant formulas. Fellow Student Travel Award recipient Bartijn Pieters next presented the exciting results of his work on the treatment of osteoarthritis patients with milk-derived extracellular vesicles, which promises preliminary therapeutic potential.

9. The final three presentations all focused on digestion of human milk, with Dave Dallas and Veronique Demers-Mathieu discussing their lab’s work on proteins and bioactive peptides. Looking at preterm and term infants, they continue to study the differences in biopeptides released, focusing on immunoglobulin survival during digestion. Didier Dupont presented an overview of some of the compositional and structural differences between human milk and commercial infant formula, using ten years’ of data to show how better formulas might be produced.

Next fall’s 2019 conference will be in Aarhus, Denmark. See you all then!