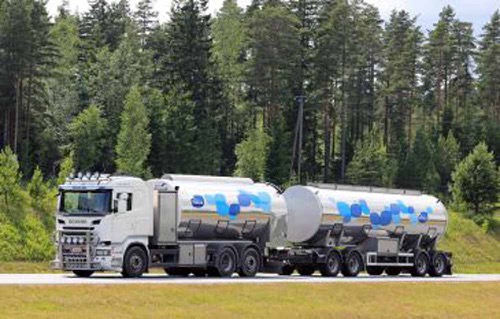 Pasteurization helps make raw cow milk safe for human consumption, but it doesn’t get rid of all bacteria. These remaining bacteria can cause spoilage, thus affecting the shelf life and quality of milk products and leading to wastage. Knowing what bacteria are present in milk before and during milk processing could help identify sources of spoilage and find ways to get rid of them.

Many bacterial species have been found in raw milk or its products [1,2]. But most previous studies have looked either in farms or in processed products, and there’s still relatively little known about the diversity of microbes present in raw milk during its transport and storage [3,4].

In a new study, Maria Marco and her colleagues at the University of California at Davis used high-throughput gene sequencing techniques to conduct a detailed analysis of the microbes present in raw milk during its transport and storage [5]. “We need to know what bacteria are there, and this first study sets the scene,” says Marco.

Many previous studies identified raw milk bacteria by seeing what grew on Petri dishes, whereas the new study used high-throughput gene sequencing for the same purpose. “We know we can only cultivate about 1% of bacteria on Earth,” says Marco. “With this new method we can take any kind of dairy sample we want and identify all the bacteria involved within a few days,” she says. “A few years ago we recognized the potential to use this new method to help dairy processors recognize what bacteria are in their milk and dairy processing streams, and to help them get the best dairy possible,” says Marco.

It’s worth pointing out that raw milk is pasteurized before processing, so all products made from it are safe for human consumption. The milk that the researchers analyzed was also of high quality, so it contained very few bacteria, according to Marco. But milk’s nutrient-rich nature makes it easy for bacteria to grow, and some stick around even after pasteurization.

For example, bacteria such as Clostridium species that form endospores are resistant to pasteurization and are known to contribute to spoilage and defects [6]. “They’re well known throughout the dairy world, so that’s one group that we were looking for,” says Marco. Other heat-tolerant bacteria or bacterial enzymes can also make it past the pasteurization step. “That’s why we need to understand what’s in there,” she says.

With funding from the California Dairy Research Foundation, Marco and her colleagues analyzed the microbiome from raw milk in 899 tanker trucks when they arrived at two different dairy processors in the California Central Valley. They found that the raw milk microbiome from the trucks was extremely diverse. “I was surprised at exactly how diverse it is,” says Mary Kable, a postdoc in Marco’s laboratory and first author on the study. In many of the samples, more than half the community consisted of bacteria that formed less than one percent of the total. Other communities were dominated almost entirely by one bacteria. “Lots of things can influence what the bacteria are in milk, and that’s reflected in this huge diversity,” says Kable.

Despite this huge diversity and even though the milk was collected at different geographic locations and across multiple seasons, every sample also had a core microbiome consisting of 29 different taxa, including Streptococcus. “That’s a little surprising too, because of how robust this core microbiome was,” says Kable. “We looked at close to 900 samples, so it’s a pretty big deal to find it in every single one,” she says. Kable points out that this particular core microbiome might be specific to California, and more studies will be needed at other locations to figure out if that’s the case.

The researchers collected milk samples in fall, spring, and summer, and found that the bacteria in raw milk also varied depending on the season. That’s not surprising, as bacteria are known to vary based on differences in temperature and moisture, and there may also be seasonal differences in what cattle are fed or how they’re housed. But this seasonal variation might be something for dairy processors to keep in mind. “It would be interesting to see if there is some seasonality to any product issues or defects they’re having,” says Marco.

Marco and her colleagues also sampled raw milk in large-volume storage silos, where it is temporarily kept before being processed. “It seemed like there were two defined groups of bacterial communities among the five silos we sampled,” says Kable. The microbiome in some silos was drastically different from that in the tanker trucks, while in others it was fairly similar. “It seems like there may be an intrinsic community in some silos despite robust cleaning protocols,” says Kable. “Maybe that’s a good first place for the dairy community to look when looking at sporadic spoilage,” she says.

Marco and her colleagues are currently working on analyzing the microbiome at later stages of milk processing, including in the final processed product. “It goes back to the idea of what we want to do, which is to identify milk as it moves through the processor, and identify early on if this milk has a higher likelihood of bacteria that would cause product defects,” she says. “This is just the tip of the iceberg.”