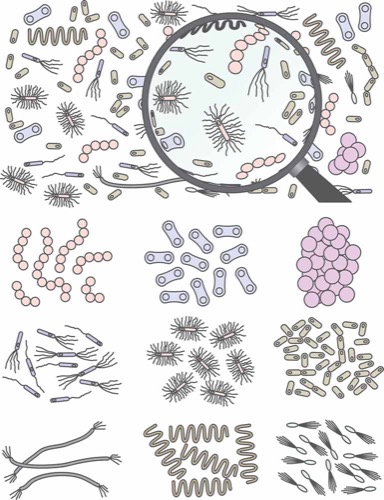 Milk enthusiasts probably all share a favorite bacterium: Bifidobacterium infantis, the species that coevolved with humans and promotes a healthy infant gut. Breast milk contains many other kinds of bacteria, but recording the full species register is a surprisingly tricky task. Recently, a team of Swiss researchers did the most complete job yet.

Ted Jost and others1 in the Zurich-based group took milk samples from seven women at three intervals after giving birth, cultured the milk in various ways, and then sequenced the DNA in the milk using multiple techniques. That should cover all the bases. Their culture methods, numbering nine, catered for bacteria of every lifestyle choice. They laced agar jelly with all manner of nutrient mixtures and provided airy compartments for species that like to grow in oxygen. Meanwhile species that flourish despite an absence of oxygen (facultative anaerobes) or can’t handle life in its presence (obligate anaerobes) were given the chance to grow in an anaerobic chamber.

Usually, the first kinds of bacteria to set up camp in a baby’s intestine are facultative anaerobes like Escherichia coli species. As expected, Streptococci, another facultative anaerobe, was one of the most common categories identified in Jost et al.’s study. Then, after a few days, when the facultative anaerobes have used up the oxygen in a baby’s gut lumen, populations of obligate anaerobes, like Bifido species, start to take off2. And Bifidobacterium infantis, by far the best at chomping through the oligosaccharides in breast milk, grows especially fast. Its growth aids the development of the baby’s immune system and makes life difficult for any pathogen trying to find a spot. This sequence of events is fairly well understood.

Jost et al’s results largely confirmed the above. But they are interesting for another reason. For the first time, several genera from the class of obligate anaerobes known as Clostridia were identified in breast milk. Some of these—Faecalibacterium and Roseburia—release relatively large amounts of a substance, butyrate, which keeps colons healthy. Butyrate is a short-chained fatty acid that reduces inflammation along the lining of the gut, possibly by inducing the death of immune cells called T cells. (B. infantis also has an anti-inflammatory influence. When fed the complex sugars found in breast milk, it binds especially well to intestinal epithelial cells and causes them to make more cytokines.)

The fact that hardcore obligate anaerobes like Clostridia and some species of Bacteroidetes popped up in their breast milk samples led Jost et al. to propose that these bugs originate in mom’s gut. That is to say, they traveled from her intestines to her mammary glands in, probably, immune cells known as dendritic cells and macrophages. Once in her mammary gland, they found their way into breast milk.

This idea has been proposed before by others, but the evidence has always been hard to pin down. To really prove the point, researchers would ideally find a macrophage with a labeled gut bacteria tagging along, and then find the same labeled bacteria inside the host mom’s breast milk. Jost et al. haven’t managed that, but their paper certainly adds to indications that this route of bacterial transfer exists.