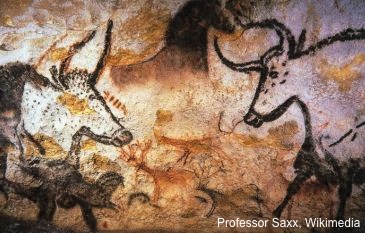 A preserved specimen of aurochs bone was discovered deep beneath the Derbyshire Dales in the UK in the 1990s (1). Aurochs are an ancient cattle breed domesticated around 10,000 years ago somewhere around modern day Iran. In Europe, the last of these animals were still found on a Polish royal reserve as recently as the 17th century. Park et al., (2) have now extracted enough DNA from the ancient bone specimen to sequence the aurochs genome. When they compared the aurochs sequence to the DNA of cattle breeds we know and use in domestic agriculture today, they found a surprisingly high level in common with British and Irish cattle.

Scientists from Britain have recovered a bone specimen from a cave deep beneath the Derbyshire countryside. The cave was recognized as an ancient burial ground and contained numerous preserved animal bones. The aurochs bone was dated as being over 6,700 years old. This was prior to the New Stone Age in Britain and during a time when Britain was connected to the European mainland. The peoples of Britain were then hunters and gatherers and, no doubt, aurochs were prized game. The first farmers apparently migrated into Britain with their livestock. However, these inhabitants probably represented less than 20% of the population, and contributed to a wider movement that saw the gradual adaptation of managed quarry (for hunting) to herding (4).

Park et al. were able to get enough DNA from the bone specimen to use modern sequencing methods, and reconstructed over 86% of the aurochs genome sequence. This corresponded to approximately 90% of the reference genome derived from a Hereford cow. Once they had this data in their files, they compared it to the sequences from over 80 other individual genomes from different cattle. They identified the places where there was a difference, or variant, between the aurochs sequence and the reference genome. Now they could focus on these 2.1 million differences and compare across a wider range of sequences from modern cattle breeds.

The goal for Park et al. was to use these variants as markers to track how the aurochs DNA was distributed in the DNA of these modern breeds. They first checked how many of these variants were already known to exist in cattle. They found that for over 90% of these variants were already recorded in cattle genomic databases. This meant two things. First, it confirmed that these sequence variants would be useful for tracking the extent to which various parts of the aurochs DNA was used in different cattle breeds, and second, they could infer which variants may have influenced selected traits.

They found that aurochs were likely to be used to inter-breed with domesticated cattle at some time in the past. Most likely, farmers looked to wild cattle to boost their stocks, but there may have also been some random matings. The scientists also found that the divergence of European breeds, relative to North African and Asian breeds, may be more recent than previously thought. This was evident from an apparent recent loss of genetic variants from the European breeds rather than an ancient split. The evidence for a significant contribution of aurochs to the modern breeds found in Scotland, Wales, England and Ireland was particularly compelling. . Thus, the interbreeding of aurochs and domestic European cattle continued long after North African and Asian breeds had already migrated.

When examining the aurochs genome, the scientists extracted a selection of variants that had functional properties. That is, they focused on a relatively small number of variants (SNP) that were identified as having a role in influencing the structure or expression of a gene. There were 166 of these, selected from across the entire genome. An analysis of these genes found that they fell into three interesting categories associated with brain function and behavior, immune response, and growth and metabolism. The scientists speculated that this reflected the selection of cattle suited to domestication. This would result in animals that behaved appropriately, or survived infections that may have become more common if they were living in more crowded conditions. They were also probably selected for their ability to pack on more muscle to provide more meat.

The scientists then looked at gene variants that were present in the aurochs genome and found to be present with very high frequency in the modern cattle breeds, that is, these particular variants were positively selected during the development of breeds. The traits these genes affected were favorable for meat production, or disease resistance, or behavior in a farm system. One of the selected gene variants that stood out was within the DGAT1 gene, which we know has a major impact on milk production traits (5).

They also identified variants that occur in microRNAs. MicroRNAs are a relatively recent discovery in mammals and are derived from very small pieces of DNA. Their main role is to influence the amount of a protein that appears from one or more specific genes. They can be quite influential in determining important traits, such as muscle growth (6). In the case of the variant identified in the aurochs DNA sequence, referred to as miR-2893, it has effects on molecules involved in neurological function, fatty acid metabolism, and immune function (2).

The study reveals a lot about aurochs, and the prehistory of modern cattle breed development. It also cements the aurochs as the origin of the genetic variation that exists in modern breeds; variation that has fueled selection over many centuries to give modern breeds the specialized roles to suit modern farm systems and food production.