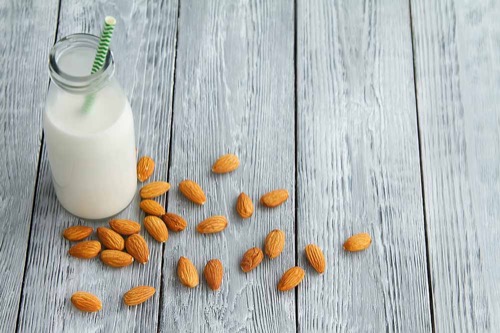 Juliet Capulet famously asked, “What’s in a name? That which we call a rose by any other name would smell as sweet.” Juliet was able to look past “Montague” and love Romeo in spite of his surname. But when it comes to food and nutrition, names matter. Case in point—plant-based “milks.” Their placement in grocery stores in the dairy case and the use of “milk” on their packaging can give the false impression that they are nutritionally equivalent to cow milk. Although plant-based milk alternatives offer many nutritional benefits and are produced to have the same texture and appearance as milk, they are not a suitable nutritional substitute for cow milk, particularly for children and adolescents.

Can You Milk an Almond?

The dairy case has become quite a crowded spot over the last 10 years. Plant-based milk alternatives that were once only found in the health food aisles of grocery stores have slowly started to claim equal real estate with cow milk in the dairy aisle. Worldwide, the sales of non-dairy milks—made from nuts, beans, oats, and even peas—doubled between 2009 and 2015 [1]. This trend is attributed to dietary restrictions, such as lactose intolerance or cow milk protein allergy, and consumer concerns about the health of animal-based foods, particularly saturated fats [1-5].

Almond milk, which can be purchased sweetened or unsweetened, and even flavored with vanilla or chocolate, is the most popular type of alternative milk beverage [1, 2]. One reason for its popularity may be the well-known health benefits of almonds, particularly their high protein content (one cup of sliced almonds has around 20 grams of protein). However, many of the nutrients that make almonds so appealing to health-conscious consumers are actually lost during the milk-making process.

You can’t get blood from a turnip, and no matter how hard you try you can’t milk an almond. After almonds are soaked in water and ground up, the mixture is strained, so that the almond pulp remains behind and the almond water is collected (almost like making almond tea). This liquid is made more “milky” both in appearance and consistency by homogenization and, in some almond milk brands, the addition of thickening agents such as seaweed-derived carrageenan [1].

Almond milk has a nutty taste, but that may be one of the only things it shares with actual almonds. By straining the liquid and discarding the pulp, almond milk has only a fraction of the protein found in almonds. And at 1 gram of protein per 8 ounce serving, it also has only a fraction of the protein found in a serving of cow milk (8 grams of protein per serving) [1,2,5]. Considering that just one serving of cow milk provides nearly 60% of the recommended daily allowance (RDA) of protein for toddlers and just over 40% of the RDA for protein in young children [3], the discrepancy between the two beverages seems even more salient.

Toddlers and young children that replace cow milk with almond milk could be coming up short on dietary protein, as well as many micronutrients [3]. Almonds are known to be good sources of magnesium and copper, but both minerals are basically lost in the “milking” process [1,3]. And although a serving of almonds is nearly equivalent to a serving of cow milk in calcium content, the same cannot be said for almond milk. Thus, most (but not all) almond milks are fortified with calcium, many advertising that they offer even more calcium than cow milk.

But buyer (and drinker) beware—more calcium in the bottle does not necessarily mean more calcium in your body. Foods vary in how much of the ingested calcium is eventually absorbed and deposited into bone, referred to as calcium bioavailability. The bioavailability of calcium from cow milk is high because of the presence of casein proteins and lactose, both of which facilitate intestinal absorption, and phosphorus, which promotes the movement of calcium from the blood to the bones.

Vitamin D also promotes calcium absorption, and this hormone is added to both cow and almond milk. However, vitamin D fortification of almond and other plant-based milks is not regulated in the same manner as fortification of cow milk, meaning vitamin D levels are variable across alternative milk types and brands. A study [6] on children aged 1–6 years living in Toronto Canada found that children that consumed non-dairy milks, which included almond as well as soy and rice milk, were at a higher risk for having vitamin D deficiency than those that drank only cow milk. This suggests that despite fortification, non-dairy milks may come up short on meeting vitamin D requirements for young children.

Almond milk does have cow milk beat on one essential nutrient, however—vitamin E. Vitamin E is an antioxidant involved in preventing damage to tissues from free radicals, and may also play a role in immunity. One serving of almond milk can provide 50% of the RDA of vitamin E [1-3], without the added calories of fat that usually come with consuming vitamin E-rich foods such as nuts and nut oils.

The Europeans take names very seriously and prohibit the use of the term milk on anything not produced by a mammal [4]. Might it be time for the U.S. and other countries to follow suit? Almond milk is certainly used in the diet in the same ways as cow milk—poured over cereal, blended up in smoothies, and added to coffee. But the critical question is whether it is perceived by consumers to be a nutritional substitute? The addition of the name “milk” may mislead many who do not do a thorough side-by-side comparison of the nutritional labels. For those using it to make a more nutty-flavored latte, this may not be cause for concern. But without other dietary changes to fill in the missing gaps, growing children and adolescents may be missing out on key nutrients.