A Jumping Spider That Provides Milk and Maternal Care 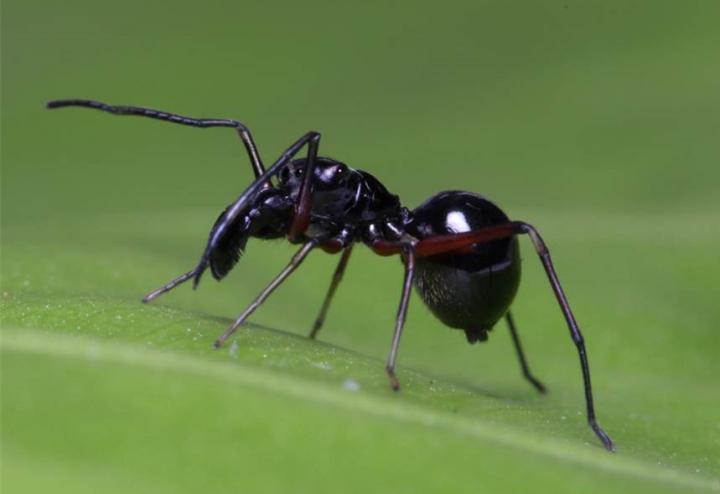 High school science classes the world over teach that mammals are unique because females furnish their young with milk. The reality is somewhat more nuanced and depends on your definition of milk. Indeed, there are various specialized food sources that a few non-mammals provide their offspring, among these the antibody-containing epidermal mucus found in some fish and trophic eggs in amphibians (as well as other classes of animal). In a recent issue of the journal Science, a group of researchers associated mainly with the Chinese Academy of Sciences report on the curious life of an ant-mimicking jumping spider, Toxeus magnus. They find that females of this species produce protein-rich droplets for their offspring to consume that are essential for the youngest spiders’ survival [1]. Curiously, female offspring continue to drink this milk even after they have become sexually mature.

Jumping spiders make up about 13% of all spiders. As their name suggests, they jump to pounce upon their prey and to escape predators. Because there are so many species, various specialists have commented that other closely related species might also demonstrate the kind of maternal care behavior recently discovered in T. magnus.

This care consists not merely of providing a nutritive liquid, but also of extensive cleaning and repairing of the nest, which is thought to keep the spiderling’s parasite loads as bay.

The milk that T. magnus produces dribbles out of the mother’s epigastric furrow, the part of her body from which her eggs emerge. The paper’s authors call the substance “milk” on the basis of two facts. First, its fatty and protein-rich composition: it contains 2.0 mg/ml sugar, 5.3 mg/ml fat, and a whopping 123.9 mg/ml protein—which is quadruple the concentration of protein found in cow’s milk. More detailed information about the types of sugars, fats, and proteins is not reported in the Science paper. The second reason for thinking of this substance as milk-like is its apparently central role in the extended spiderling-mother relationship.

Experiments reported in the paper show that very young spiders are entirely dependent on the substance for their survival. The authors demonstrated this by gumming up the mother’s epigastric furrow with correction fluid (which they separately checked to ensure did not in itself affect spiderling survival). Blocking the source of milk in this way led to the death of all hatchling spiders at less than 10-and-a-half days old.

When the supply was blocked later in development, when spiderlings were 20 to 40 days old, for example, survival was affected, but spiderling body weight was not. The reason was that by that age the spiderlings were able to leave the nest to forage—an inherently dangerous activity—and make up the shortfall in their energy intake. These spiderlings still tried to suckle from their mother’s epigastric flow. The role of maternal care was laid plain by another manipulation: the 20–40-day-old spiderlings without milk and with their mother in the nest were significantly more likely to survive than those of the same age for which the mother was removed, presumably because the latter grew in unkept nests and were consequently more burdened by parasites. At 60 days of age, T. magnus becomes sexually mature. At that point, the experiments showed that some female offspring remain in the nest and may continue to consume mother’s milk. (Males, however, were kept out, perhaps to avoid inbreeding.)

There are other non-mammals that are said to produce a sort of milk. More milk-like than epidermal mucus and trophic eggs is the crop milk produced by both male and female pigeons [2] and the brood-sac secretions of the cockroach, Diploptera punctata [3]. The authors speculate that T. magnus’s epigastric furrow secretions may have evolved from trophic eggs, under the strong selection pressures of high predation risk and uncertain access to food. That story of origins, related to the question of whether this kind of maternal care is found in other species of Toxeus and evolutionary proximate genera, is just one area primed for new research. Rarely does a paper about spiders shake zoology so intensely.