A Hearty Helping of Dairy 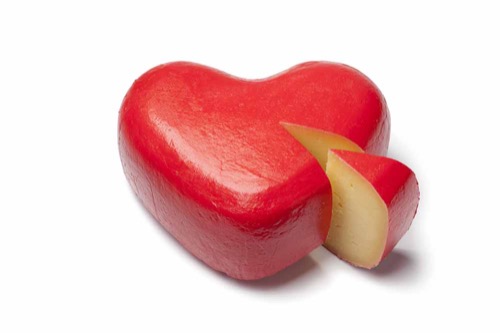 Most people know they hike the odds of developing cardiovascular disease by incessantly puffing on cigarettes and by eschewing the gym in favor of the TV. Stuffing saturated fats down one’s gullet is another well-known risk factor, leading to an increase in low-density lipoprotein in the blood and thus to clogged arteries. On that basis, dairy products seem unlikely protectors of a healthy heart. But various studies suggest they might be just that, particularly—and bizarrely given its high fat content—cheese.

The evidence is not straightforward, nor, where it exists, very dramatic. Most studies that have looked for a statistically significant trend between dairy consumption and cardiovascular disease have found none. However, those that have formally claimed an association have usually concluded that eating milk-based foods is good for you. The theory goes that unlike most other foodstuffs with high levels of saturated fat, dairy products package “bad fats” with many other nutrients, which, in turn, seem to have positive effects sufficient to override the saturated fats’ badness.

Meta-analyses, which statistically combine many different studies, attempt to provide overall answers to grand questions about health. And cohorts where study participants record what they eat from the outset (prospective studies)—rather than try to recall it afterwards—are less warped by the imperfections of human memory.

Combining those principles, a 2004 meta-analysis of 10 prospective cohort studies found that people with high dairy intakes are less likely to suffer a stroke than those with little dairy in their diets. But this analysis reported no significant trend for heart disease. So, in 2010, a follow-up meta-analysis was performed by some of the same researchers at the University Hospital of Wales in Cardiff, which included more studies in the analysis. It did find a small protective effect for dairy and underscored the previous results for stroke.

Those kind of general answers are helpful, but health guidelines would benefit more from specific information on how different dairy foods influence cardiovascular risk and how putting dairy into different bodies (namely those of men versus women) modifies that risk.

Any sex differences appear muddled, and that may be because they aren’t really there. In Japan, where people generally gobble little dairy, a study comparing men and women found a 14% cut in the risk of death by cardiovascular disease for every extra 100 g of dairy product that women consumed per day [Ref 1], but there was no effect for men. The academics behind the study offer various explanations for this, including Japanese men’s much lower dairy intake next to Japanese women’s intake—which may have made any effect too hard to ascertain—and the possible masking effects of higher levels of workplace stress among the men.

The result is certainly strange next to another study that followed 2,500 middle-aged Welshmen into old age [Ref 2], and regularly noted their blood pressure and arterial wall stiffness. In this group, dairy intake did indeed lead to less stiff arteries later in life and also strongly predicted systolic (maximum resting) blood pressure 23 years later; impressively, the men in the quartile with the highest dairy consumption in the study recorded blood pressure scores 10.4 mm Hg lower, on average, than the men who didn’t consume milk products.

Morbid stats demonstrate how noteworthy this is. The medical literature equates a 4 mm Hg decrease in systolic blood pressure to a 15.7% reduced chance of death by stroke, and to 9.9% lower odds of having a heart attack.

Studies of other northern Europeans offer yet more conflicting messages on sex differences. A massive cohort in the Netherlands—of more than 120,000 people—reported that the health of men was unaffected, whereas that of women was negatively impacted by dairy consumption, although only slightly [Ref 3]. This finding is again contradicted by a survey of over 33,000 Swedish women [Ref 4], who, as a group, tended to eat an awful lot of dairy. But the more dairy they ate, the lower their risk of heart attack.

If you’re gonna have a burger, add cheese

A logical explanation behind this messy thicket of data probably lies with the kinds of dairy products the people in question were consuming. Some of the aforementioned studies did not subdivide dairy in much detail. But those that did suggest that butter increases some of the risk factors for poor cardiovascular health, meanwhile cheese and yogurt do the opposite.

The dairy-loving Swedish women, for example, were international anomalies in their fondness for cheese. When the study authors from the Karolinska Institute, in Stockholm, statistically reorganized their analysis to examine this oddity, the first thing they noted was an extra-strong protective effect: the group of women who ate the most cheese (a whopping six servings per day!) were 26% less likely to have a heart attack than those that ate a single serving on about two out of three days.

Cheese, being laced with saturated fat, is unlikely to cause such an effect without invoking some other mechanism. So these researchers then probed all of their dairy consumption and health data for correlations that might link the ingestion of individual minerals to cardiovascular robustness. This exercise revealed that the cheesy goodness can be explained by the packaging of saturated fat with calcium. Inside the intestines of cheese-loving Swedish ladies, dietary calcium probably binds fats that could otherwise have contributed to ill-health into insoluble soapy substances. And these would have found their way into the ladies’ feces, not their bloodstreams.

The health-giving effects of yogurts seem to derive from the details, too. In this case, the strain of starter culture employed in the fermentation process appears to be all-important. Yogurts made with conventional strains, such as Lactobacillus bulgaricus and Streptococcus thermophilus, don’t do much to alter lipoprotein levels in blood. But products manufactured with strains known as probiotics, which encourage the growth of healthy bacteria in the guts of yogurt eaters (and others), appear more useful. The reasons why are merely postulated. Prominent among them is the idea that certain bacteria do a better job of breaking down complex carbohydrates inside the intestine, leading to an increase in short-chain fatty acids in the blood and consequently to an inhibition of cholesterol synthesis by the liver.

Whatever is going on in the body, these mechanisms are unlikely to capture the full picture of how dairy influences cardiovascular health. Little is known, for example, about how bioactive peptides derived from casein proteins shift the regulation of blood pressure through their inhibition of angiotensin I-converting enzyme—nor about the likely vasodilatory consequences of several minerals present in milk.

Although the combination of all of these effects appears to skew health outcomes only slightly over time, this is surely important enough for health systems to take note. In the United States, a country hardly famed for a population in fine cardiovascular fettle, dairy products account for 21% of all saturated fat consumed. So maybe, rather than just nagging people to eat less saturated fat, health professionals could place more emphasis on which fatty foods aren’t so bad for you. They could start by offering around the cheese plate.