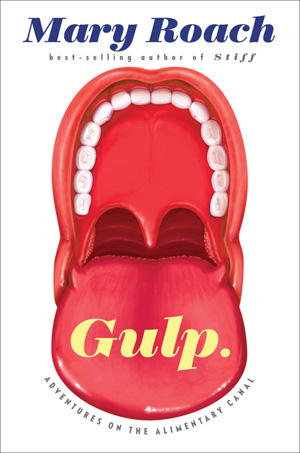 The last time I read Mary Roach was on holiday, in the evenings that followed long hikes up, along, and down tabletop mountains in southern Venezuela. I read aloud from Stiff: The Curious Lives of Human Cadavers because my tent buddy was too careful a packer to have allowed himself the additional mass of a book. As he sensibly tended to sore blisters and swollen bites, I enriched the moment by, for example, loudly vocalizing Roach’s prose about the precise details of how and when death occurs in people who are unlucky enough find themselves inside planes that explode in the sky.

This time I’m digesting Gulp: Adventures on the Alimentary Canal in the tearoom of the University Library in Cambridge, England. Although this is the sort of canteen that lumps all formulations of coffee that are not ‘filter coffee’ into the single category ‘specialty coffee’, the students here call the library ‘Alcatraz’ because of its décor, not the quality of the refreshments.

I find myself paying close attention to the mastications of those around me. The way you chew, according to Roach, is ‘as unique and consistent as the way you walk or fold shirts’. Indeed, the best predictor of how long people spend chewing before they swallow is who’s doing the chewing, not any attribute of the food that they’re eating. Before today, I think I’ve only consciously considered how I chew during moments of inappropriate inelegance.

This is one of Roach’s many gifts: she arouses readers’ sense of intrigue in the mundane and then satisfies their curiosity using simultaneously crisp, graceful, and puckish turns of phrase. Chewing comes after her discussions of feeding preferences, part of a narrative arch that goes on to follow the entire structure of the alimentary canal. The book is replete with yuck-but-wow anecdotes that are tempting to inflict on those around you as you read. Yesterday, as I was having my hair cut, I informed the person doing the cutting that human hair is in fact kosher, should she ever get hungry at work. Pet food, I let the cat know this morning, has a higher nutritional value (for the humans who eat it – and a surprisingly large number apparently do) than sirloin steak, McDonald’s burgers, bacon, fried chicken, ham, or shrimp. (I was not enthused enough to try it, though.)

Roach weaves such details, digressions, and sub-stories together deftly. And what seem like tangential or ridiculous questions – Can chewing lower the national debt? Can the eaten eat back? – are answered engagingly, and linked back to the book’s fixed path with some carefully applied literary peristalsis.

She has dug up some real gems. The story behind that photo taken in the Florida everglades, of a dead alligator and the burst python that made the fateful decision to swallow it, probably involved the alligator kicking its way out, the experimental evidence suggests. A chapter titled ‘I’m all stopped up’ describes her interview with Elvis’s longtime doctor, George Nichopoulos, and suggests that the singer died from straining so hard on the toilet that he threw off the rhythm in his heart. The autopsy of Elvis’s body found no obvious cause of death, although it did reveal that his colon was two to three times normal size. Today, ‘megacolon’ is commonly associated with colon inertia, but back in the 1970s medical practitioners didn’t realize that, in certain cases, constipation can kill.

Roach offers only a few brief notes about milk, where plenty more would have been apt for this book. She mentions that lactose intolerance can lead to flatulence and that baby saliva contains lots of lipase, which tapers off as infants are weaned. But those examples aside, her observations are sociological, not biological. Roach reports that the consumption of five glasses of a woman’s breast milk is sufficient, according to one Islamic scholar, for a man to be the woman’s ‘breast milk son’, and therefore left alone with her, even though she is not a member of his immediate family. Another scholar writes that the man must drink from her breast. ‘Which is crazier,’ asks Roach, ‘that Saudi courts, in 2009, sentenced a woman to forty lashes and four months in prison for allowing a bread deliveryman inside her home, or the notion that she might have avoided punishment by letting him suckle on her breast?’

I finish my reviewing session fully satiated with weird and wonderful—and disgusting—facts, and head to the toilet where someone once scratched on the back of the door ‘Graffiti, spontaneous and anonymous, is the purest form of art. Discuss.’

Sitting there, I flick back to Roach’s chapter on Elvis and wonder whether to add to Alcatraz’s decoration with a passage from the autopsy report: ‘this [Elvis’s] megacolon was jam-packed… the impaction had the consistency of clay and seemed to defy Florendo’s efforts with the scissors to cut it out’. Or with Roach’s introduction to a late chapter: ‘Should circumstance prevent a man from carrying his cigarettes and mobile phone in his trousers pocket, the rectum provides a workable alternative. So workable that well over a thousand pounds (400kg) of tobacco and hundreds of mobile phones are rectally smuggled into California state prisons every year’.

I decide against it. If there is a take home message here, it’s to relax as you go.